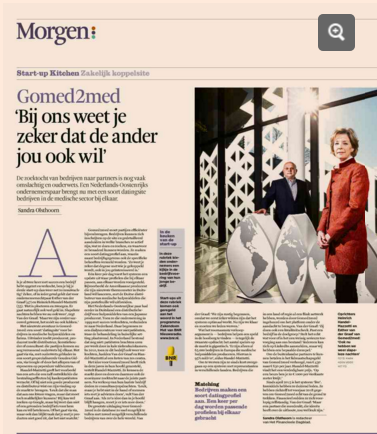 A lot of times the search for companies of partners is very devious and old fashioned.

A Dutch-Austrian entrepreneurial couple uses a dating website to bring companies in the medical world together.
If you started a successful company two times and sold those, are you still nervous when you start a third company? Absolutely, or at least this is true for the entrepreneurial couple Esther van der Graaf (47) and Heinrich Handel-Mazzetti (55). ‘It is working hard and toiling. Of course also a lot of money goes into this. We also have more sleepless nights now,’ Van der Graaf says. But we have been successful before, so we should be able to do that again.’

The newest adventure is Gomed2med: it’s sort of a ‘datingsite’ for companies in medical aids and farmaceuticals. The inventor is looking for a producer, the producer is looking for a distributor, licensee or consultant: all these parties find their way to eachother in a very old fashioned way. Most of the time it’s through other people, or looking in phonebooks, through Google or walking around and exposing stuff at expensive exhibitions.
Handel-Mazzetti gives an example of a doctor who developed a cream which helped against radiationeffects at cancerpatients. He asked him whether or not he found a good producer and distributor to introduce his invention on the market. ‘Nice that he came to ask us that, but this should be easier. He kan look around on Google, but he doesn’t know if a found company can help him or not. Or this happens through other people, but a lot of times it happens that you found the wrong people for your products, or that there isn’t a match.’

Gomed2med needs to bring parties together more efficiently. Companies can subscribe on the website en fill in the branches they are active in, what they do and what they are looking for, and what they can be approached about. They make a sort of ‘dating profile’, where next to the details about the company specific needs are also mentioned. ‘This way you are certain that the person you are matched to, is also interested in you.’
Once a day the system updates profiles that are a match, and they are introduced.

For example the American producer who wanted to launch their newest thermometer in Germany was matched to a German distributor of medical aids who wanted to broaden their portfolio.

The Dutch-Austrian pair used to have a German distributor company for aids of a Japanse producer.
When they sold that venture with success in 1999, they moved to Holland. That’s where they started a dialysis centre for kidney patients, where the treatment took place in a homely setting. In Holland that didn’t exist yet: patients used to spend hours in empty hospital rooms. They sold the company in 2010, and at that time Van der Graaf and Handel-Mazzetti already owned a chain of six centres.

The idea for Gomed2med has been in their heads for years now, Handel-Mazzetti says. They know the market very well and know that it’s difficult to find suitable partners. After selling their last company they did some consultancy commissions. ‘It’s fun, but you don’t have any control about what people will do with your advice,’ Van der Graaf says. ‘If an idea like this is stuck in your head, you should do something with it.’

The biggest challenge faced by Gomed2med is that the database needs to be filled with lots of different global companies as quickly as possible. Van der Graaf: ‘We started slowly, because we wanted to be sure the system works well. Now we’re ready and we need to get members.’

Companies create a dating profile. Once a day matching profiles are brought together.

The best argument for sales is – companies help each other to find a needle in a haystack – is also the biggest challenge: the amount of players on the field is gigantic. ‘Only in Europe there are 65.000 companies who produce medical aids. ‘Around 95% of these is a SME’, Handel-Mazzetti says.

To get members they recently changed to a system with representatives in different countries. Companies who already have a big network in a country or region, are hired by Gomed2med to bring attention to the platform. Van der Graaf: ‘They also do a quality check. Is a company a right fit for the target audience? Is it serious, or is it not a valuable addition to our portfolio? Everybody can sign in on LinkedIn, but we do have a threshold.’

To be able to pay partners abroad the membership of Gomed2med has been  raised, from 430 euros a year to 630 euros a year. Handel-Mazzetti thinks this is a good price. ‘At a business fair you have to pay 1000 euros for one square meter.’

Since April 2015 the system is on the air. Now they have 1000 members. They have given themselves until spring 2018 to get Gomed2med to work well. Financially they can manage independently. Van der Graaf: ‘But a partner who is able to think with us, has ideas about expanding would be great.’

(Translated from the original)

Russia leaving the ISS is big news. Unclear yet what it would mean for operational capability, but bigger question I have is where they will go with their operations. Tiangong seems like the most probable location and a game changer for the international space field. #Space

Our companyndesigns and manufactures single-use medical procedure instruments for endoscopic use. All of our products are utilized by inserting through an endoscopic channel during procedures in or examination of the gastrointestinal system for polyp removal or biopsy.

new member: Niltorg LLC is Moscow, Russia based import and distribution company dealing into Speciality Pharma and Medical Devices products. With 6 offices located in Russia, Niltorg LLC have sales and distribution offices in Kazakhstan, Ukraine, Belarus and in Uzbekistan.

@PharmapackEu one more day to match and meet at the International Meeting Lounge!